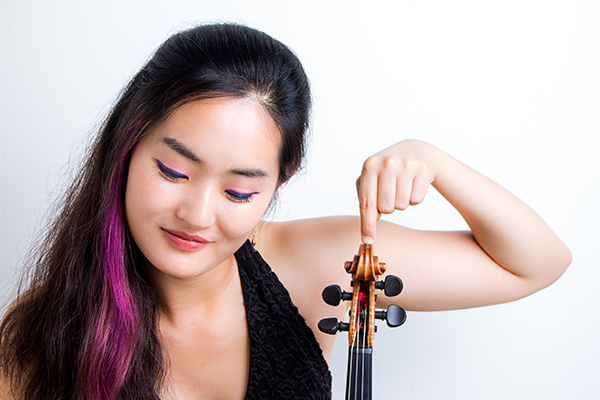 Having earned her Bachelor’s and a Master’s degree from Seoul National University, Ms. Kim received her Artist Diploma, as a Starling Fellow on full scholarship at the USC-Thornton School of Music, under the tutelage of violinist Midori Goto.Since moving to Los Angeles in 2013, she has won first place in USC’s Solo Bach Competition and the Strings Concerto Competition, and was a semi-finalist at the Qingdao International Violin Competition and the Michael Hill International Violin Competition.

In 2018, she won second prize at the Boulder International Duo Competition with pianist Sung Chang. YuEun’s biggest passion is chamber music, she is a founding member of the Zaffre String Quartet and has been performed at chamber music festivals around the country, including the Perlman Music Program, Yellow Barn, Banff Chamber Music Residency, Four Seasons Chamber Music Festival and collaborated with such distinguished artists as Ida Kavafian, Colin Carr, RogerTapping, Michael Kannen and Steven Tenenbom. YuEun has appeared as a soloist with the USC Symphony Orchestra, Symphony Irvine, LA Virtuosi, Temecula Valley Symphony and Sequoia Symphony. She has won the “Beverly Hills National Audition” and has been selected to play at “Sundays Live at LACMA”, and joined the roster at ‘Classics Alive’ management.

In 2017, YuEun undertook a project dear to her: performing Beethoven’s complete violin sonatasover three concerts, with pianist Sung Chang. She recently completed a tour in the Bay area with guitarist Ines Thome(Yu&I Duo) and solo recitals at LACMA and Dame Myra Hess series in Chicago. Her 2019 season highlights include regular performances with the chamber ensemble ‘Delirium Musicum’ of which she is a founding member, soloing Bach concerto with LA based early music ensemble’ ‘Musica Angelica’, solo debut at Seoul Art Center in Korea and the ‘Chopin Project’ that was inspired by her Youtube video which hit 3 million views.