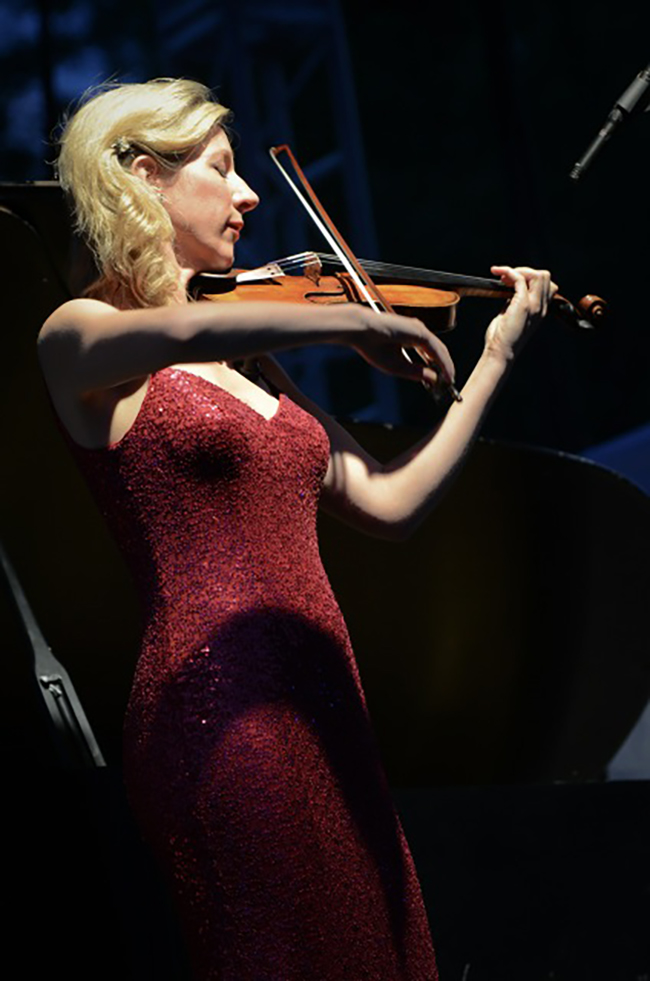 American violin virtuoso Elizabeth Pitcairn is passionate about youth and education. She serves as President and Artistic Director of the Luzerne Music Center which provides training for gifted young musicians ages 9-18 in the Adirondack Mountains of upstate New York.

The artist performs with one of the world’s most legendary instruments, the “Red Mendelssohn” Stradivarius violin of 1720, said to have inspired the Academy Award–winning film The Red Violin. Pitcairn is featured on the 10th Anniversary edition of The Red Violin DVD in a special feature called “The Auction Block”. Named the Red Stradivarius violin while in the possession of Joseph Joachim, it was a gift from her grandfather in 1990 at Christie’s Auction in London.

Born in 1973 in Bucks County, Pennsylvania, to a closely-knit musical family (her mother is a Juilliard-trained cellist), Pitcairn began playing the violin at age three and made her debut with orchestra at 14. Her path led her to Los Angeles to study with preeminent violin professor Robert Lipsett at the University of Southern California. Her former teachers include Julian Meyer, Sylvia Ahramjian, Jascha Brodsky, Robert Lipsett and Shmuel Ashkenasi. She was a member of the distinguished faculty of both USC and the Colburn School for 10 years (2000-2010), taught at the Encore School for Strings, and is an alumna of the Marlboro Music Festival, the National Repertory Orchestra, Luzerne Music Center, Temple University’s Center for Gifted Young Musicians, the Philadelphia Youth Orchestra, the Meadowmount School, Point Counter Point, the Encore School for Strings, the YMF Debut Orchestra and the American Youth Symphony under the direction of Mehli Mehta. She served as concertmaster of the New West Symphony under the direction of Boris Brott for 11 years (2000-2011). With Maestro Brott, she appeared with the McGill Chamber Orchestra of Montréal, the National Academy Orchestra in Ontario and the New West Symphony. She has appeared in recital for the Philadelphia Chamber Music Society, and for a special event at the Aspen Music Festival with President and CEO Alan Fletcher and soloist Robert McDuffie. She believes strongly in philanthropy and is a frequent performer for charitable events such as the American Cancer Society, the Breast Cancer Research Foundation, the Helping Hands and Hearts Foundation and the Nakashima Foundation for Peace.

A champion of new music, Pitcairn commissioned Sweden’s renowned composer Tommie Haglund to compose the violin concerto tone poem Hymnen an die Nacht (Hymns to the Night), receiving a Swedish Grammi nomination in 2009. Other commissions include a sonata for violin and piano by Russian composer David Finko and The Blue Vishuddha (2014) by Sara Carina Graef which was composed for her Fisher Center recital at Bard College.

Pitcairn made her debut with orchestra at age 14 performing the Saint-Saëns Concerto, and has since appeared as soloist with the Philadelphia Orchestra at the Academy of Music and at Lincoln Center’s Alice Tully Hall in the year 2000 with the New York String Orchestra in her New York debut. She has since performed at Carnegie Hall, Walt Disney Concert Hall, the Kimmel Center, Saratoga Performing Arts Center, and the Fisher Center at Bard College. She has given performances of the Mendelssohn Violin Concerto with the Shenzhen Symphony Orchestra of China and with conductor Wagner Politschuk in São Paulo, Brazil. Under the baton of Finnish conductor Hannu Koivula, Pitcairn has performed the Barber Concerto with the Vaasa City Symphony, the Jönkopping Symphony of Sweden and given the premiere of eminent Swedish composer’s Hymnen an die Nacht with the Helsingborg Symphony. She gave a nationally televised broadcast of the Bruch Violin Concerto with the Classic FM Radio Symphony Orchestra of Bulgaria conducted by Maxim Eshkenazy. She has also concertized in Italy, France, Germany, the British Isles, Hungary, Brazil, Canada, Mexico, the U.S. Virgin Islands, Cayman Islands, the French West Indies, Austria, Romania and the Czech Republic. She has appeared in recital at the Cayman Arts Festival with pianist Glen Inanga and with the Arkansas Philharmonic and the North Mississippi Symphonies conducted by Steven Byess. She has appeared with the Fort Collins Symphony conducted by Wes Kenney, the Allentown Symphony with Diane Wittry, the Bucks County Symphony, Ridgewood Symphony and Knickerbocker Chamber Orchestra of New York led by Gary Fagin, the Marin Symphony conducted by Alasdair Neale and the USC and Richardson Symphonies conducted by Anshel Brusilow. She performed the Brahms Double Concerto with Ronald Leonard, under the sbaton of Yehuda Gilad and Carlo Ponti, Jr. She has performed the Tchaikovsky Violin Concerto with the San Luis Obispo Symphony music director Michael Nowak, and the Beethoven Violin Concerto with Lara Webber and the Livermore Symphony. In 2010, on the 20th anniversary of the auction of the Red Mendelssohn Stradivarius, she gave a commemorative recital in Cremona, Italy with pianist Igor Longato, whom she met at the International Tchaikovsky Competition in Moscow in 1998. She has toured northern Italy with the TOCCATA-Tahoe Orchestra performing Vivaldi’s Four Seasons and in 2017, she will tour Vienna, Salzburg and Prague, as well as Romania and Serbia. Also in 2017, she will perform The Red Violin Chaconne with Maestro Jung-Ho Pak and the Cape Symphony and record the Sibelius Violin Concerto which will be released together with the Mendelssohn Violin Concerto.

Her discography includes the Tchaikovsky and Mozart A Major Concerti with the Slovenia Radio Television Orchestra, Hymnen an die Nacht (Hymns to the Night) by Tommie Haglund with the Helsingborg Symphony for Phono Suecia, the Bruch Scottish Fantasy and Sarasate Carmen Fantasy with the Sofia Philharmonic, the Beethoven and Bruch Concerti (2015), the Brahms and Mendelssohn Violin Concerti (2016) and the Sibelius Concerto (2017) with the Classic FM Radio Orchestra of Bulgaria conducted by Maxim Eshkenazy.