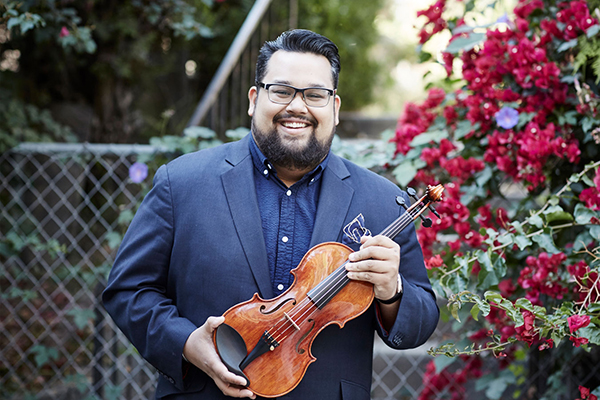 Vijay Gupta is a violinist and social justice advocate. An esteemed performer, communicator, and citizen-artist, Gupta is a leading advocate for the role of the arts and music to heal, inspire, provoke change, and foster social connection. Gupta is the founder and Artistic Director of Street Symphony, a non-profit organization providing musical engagement, dialogue and teaching artistry for homeless and incarcerated communities in Los Angeles.

Recognized for his “dedication to bringing beauty, respite, and purpose to those all too often ignored by society while demonstrating the capacity of music to validate our shared humanity”, Vijay Gupta is a 2018 John D. and Catherine T. MacArthur Fellow.

Vijay Gupta is a celebrated speaker, educator and advocate, and works as a consultant and guest lecturer with education, performance and presentation institutions across the US and Canada. He currently serves on the faculty of The Colburn School and Longy School of Music, and is the Senior Program and Artistic Advisor of Young Musician’s Foundation, an LA-based musical training, performance and advocacy organization. Gupta also serves on the board of directors of the DC-based national arts advocacy organization Americans for the Arts, as well as Los Angeles’s beloved 24th STreet Theatre.

An acclaimed violinist and seasoned international performing artist since the age of 8, Gupta made his solo debut with the Israel Philharmonic Orchestra under the baton of Zubin Mehta at age 11. In 2007, at 19, Gupta joined the Los Angeles Philharmonic Orchestra, and served as a member of the First Violin section through 2018. He has appeared as a guest concertmaster with the Los Angeles Opera and the Philharmonia Orchestra of London, and is an active recitalist, soloist and chamber musician.

Gupta holds a BS in biology from Marist College (‘05) and an MM in violin performance from the Yale School of Music (‘07). Gupta is the recipient of numerous awards and honors, including an honorary Doctor of Humane Letters by the University of La Verne and the 2017 Leonard Bernstein Lifetime Achievement Award from the Longy School of Music. Gupta is a 2017 Citizen Artist Fellow with the John F. Kennedy Center for the performing Arts and a 2011 TED Senior Fellow. Gupta is represented as a speaker by the Lavin Agency and performs on a 2015 violin made by Los Angeles maker Eric Benning.