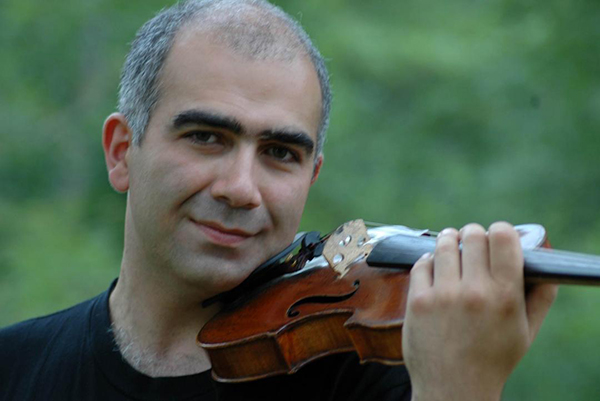 Movses Pogossian made his American debut performing the Tchaikovsky Concerto with the Boston Pops at Symphony Hall in 1990, about which Richard Dyer of the Boston Globe wrote: “There is freedom in his playing, but also taste and discipline. It was a fiery, centered, and highly musical performance…” Movses Pogossian has since performed with orchestras such as the Brandenburger Symphoniker and the Halle Philharmonic in Germany, the Sudety Philharmonic in Poland, the Tucson Symphony, the El Paso Symphony, the Scandinavian Chamber Orchestra of New York, and the Toronto Sinfonia. His recent and upcoming performances include recitals in New York, Boston, Ann Arbor, and concerts in Korea, Japan, Germany, Canada, and Armenia. Pogossian was one of the 2016/17 Artists in Residence of the Los Angeles Chamber Orchestra, and performed the Mansurian Concerto No. 2 at their season-opening concerts, conducted by Jeffrey Kahane.

He is a Prizewinner of the 1986 Tchaikovsky International Competition, and the youngest-ever First Prize winner of the 1985 USSR National Violin Competition, previous winners of which included David Oistrakh and Gidon Kremer. An active chamber musician, Pogossian has performed with members of the Tokyo, Kronos, and Brentano string quartets, and with such artists as Kim Kashkashian, Jeremy Denk, Lynn Harrell, Ani and Ida Kavafian, and Rohan de Saram. He frequently collaborates with the Apple Hill Chamber Players, teaching annually at their summer music festival in New Hampshire. Movses Pogossian is the Artistic Director of the critically acclaimed Dilijan Chamber Music Series, which performs at Zipper Hall in downtown Los Angeles, and is currently in its fourteenth season (http://dilijan.larkmusicalsociety.org).

A committed propagate of new music, Pogossian has premiered over 80 works, and works closely with composers such as G. Kurtág, K. Saariaho, T. Mansurian, A. R. Thomas, P. Chihara, and Gabriela Lena Frank. His recently formed Duo with remarkable Japanese percussionist Kuniko Kato has commissioned several works for this unusual medium. In Los Angeles, Pogossian frequently performs on Monday Evening Concerts, and is the recipient of the 2011 Forte Award from Jacaranda, given for outstanding contributions to the promotion of new music and modern music.

His discography includes Complete Sonatas and Partitas by J. S. Bach and solo violin CDs “Inspired by Bach”, “Blooming Sounds”, and “In Nomine”. The 2009 release of G. Kurtag’s “Kafka Fragments” for soprano and violin on Bridge label (with Tony Arnold) includes a unique video documentary on the work with the composer, and a DVD of an unedited live performance. In his review of the recording, Paul Griffiths writes: “…remarkable is Pogossian’s contribution, which is always beautiful, across a great range of colors and gestures, and always seems on the edge of speaking—or beyond.” The recent Bridge Records CD of Complete Violin Works of Stefan Wolpe made the 2015 Top Ten list in Sunday Times (UK). Upcoming releases include a Schoenberg/Webern DVD, recorded at Schoenberg’s Brentwood home (with Kim Kashkashian, Rohan de Saram, and Judith Gordon), and a double album of Chamber Music of Tigran Mansurian, with Kim Kashkashian.

Since earning his advanced degrees from the Komitas Conservatory in Armenia and the Tchaikovsky Conservatory of Music in Moscow, Mr. Pogossian has held teaching positions at Duquesne, Bowling Green, Wayne State, and SUNY Buffalo Universities. His principal teachers were L. Zorian, V. Mokatsian, V. Klimov, and legendary Louis Krasner. Movses Pogossian is currently Professor of Violin at the UCLA Herb Alpert School of Music, as well as Founder/Director of the UCLA Armenian Music Program. He participates in the Music for Food project, which raises awareness of the hunger problem and gives the opportunity to experience the powerful role music can play as a catalyst for change.