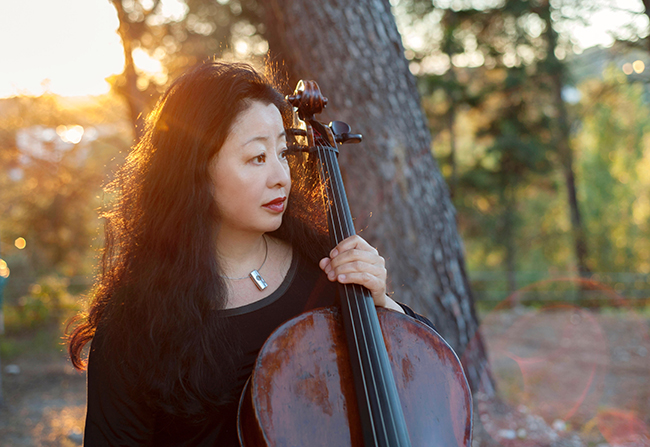 “Uncompromising musical character and a towering technique… In the breadth of her virtuosity and the charisma of her musical personality, Tsan made this work her own.” (DanielCariaga/LA Times/Haydn D Major Cello Concerto)

Born in France, Cécilia Tsan began playing the cello with the same teacher as her childhood friend Yo-Yo Ma. A Philosophy and Chinese major, she also graduated from the Conservatoire National Supérieur de Musique de Paris under André Navarra. She is a prizewinner at the Barcelona, Florence and Paris International competitions. She toured throughout the world as a soloist and as a chamber musician with Rudolf Firkusny, Jean-Yves Thibaudet, Simone Pedroni, Michel Dalberto, Pascal Rogé, Pierre Amoyal, Augustin Dumay, Martin Chalifour, etc…

She enjoys her many chamber music performances. Her recent solo concerts include the Suite from Memoirs of a Geisha by John Williams, Saint-Saëns and Elgar Cello Concerti, Brahms Double Concerto, Tchaikovsky Rococo Variations. In 2012, she performed the World Premiere of Eric Tanguy’s piano trio specially written for her and published by Salabert. That Paris concert was broadcast by Radio-France and the US premiere performed in November 2012 in Los Angeles for Jacaranda. In November 2013 she gave the West Coast Premiere of Tanguy’s 2nd Cello Concerto dedicated to and premiered by Rostropovitch and Ozawa.

Cécilia has also served as Principal Cello for the Pasadena Symphony, the Los Angeles Chamber Orchestra, the New West Symphony, the Santa Barbara Symphony, the Oscars, the Emmys, American Idols, Dancing with the Stars and America’s Got Talent.

Since 2017, she has been the Artistic Director of the new music series at Mount Wilson Observatory, “Sunday Afternoon Concerts in the Dome”, which attracts a larger audience every year.

In April 2019, she was invited by the Los Angeles Philharmonic and Esa-Pekka Salonen to become one of the two main characters of Stravinsky melodrama “Perséphone”, directed by Peter Sellars: as the Narrator, she had to recite André Gide’s poetry in French for several performances at Disney Hall.

She also gave several concerts with acclaimed French jazz pianist Jean-Michel Bernard, along with Sara Andon, Peter Erskine and Bob Sheppard, in homage to the great Lalo Schifrin who was in attendance. This upcoming season she will also tour in France performing the Elgar Concerto for Cello & Orchestra.