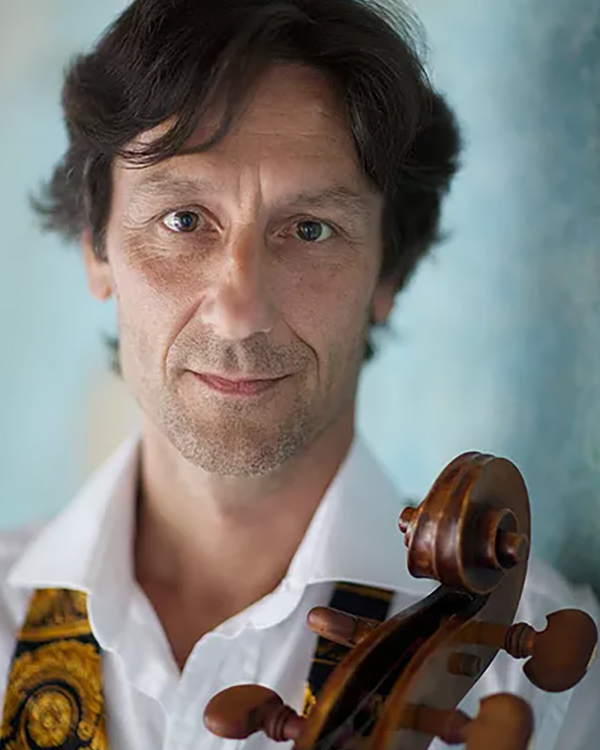 Antonio Lysy, an artist of international stature and a dedicated pedagogue, has performed as a soloist in major concert halls worldwide. He has appeared with such orchestras as the Royal Philharmonic and Philharmonia Orchestras of London, Camerata Academica of Salzburg, Zurich Tonhalle, the Zagreb Soloists, Orchestra di Padova e il Veneto, Israel Sinfonietta, the Montreal Symphony Orchestra, the Toronto Symphony Orchestra, Les Violions du Roi, and most recently the Camerata Strumentale di Prato. He has collaborated with distinguished conductors including Yuri Temirkanov, Charles Dutoit, Sir Yehudi Menuhin, Sandor Vegh, and Kees Bakels, and continues to perform regularly both as a solo, and chamber music artist. Lysy enjoys exploring the versatility of the cello’s voice, from Baroque to electric, and is committed to projects which enrich his diverse interests in music.

The touring show he co-produced and directed, “Te Amo, Argentina”, a personal journey through the heart and soul of Argentina’s fascinating culture, featuring solo cello and chamber works, dance, film, and spoken word, has met with widespread acclaim. Tango dancers Miriam Larici and Leonardo Barrionuevo and the Te Amo, Argentina Ensemble, join Lysy in this inspiring multimedia experience. Te Amo, Argentina is based on Lysy’s Latin Grammy award-winning CD on the Yarlung Records label – “Antonio Lysy at the Broad – Music From Argentina”, featuring the works of Piazzolla, Golijov, Ginastera, Bragato, and Schifrin. The CD won the ‘Best Classical Contemporary Composition’ award for Pampas, a piece he commissioned from Lalo Schifrin. A recent review on Musicangle.com declares it “among the most beautiful recordings of cello and piano you are likely ever to hear”, and Absolute Sound recognized it as one of the 40 best recordings of all time.

Highlights of his recent work include an extraordinary recital, broadcast on live radio, celebrating Bach and the cello through performances on baroque, acoustic, and electric cellos at the Los Angeles County Museum of the Arts. A program with Les Violons du Roi in Quebec city, led “Le Soleil” to remark: “Antonio Lysy shone and enchanted his audience in an arrangement for cello and strings of Schubert’s Arpeggione”. He produced and presented a multimedia concert with pianist and actor Jean Marchand, showcasing the history of his Carlo Tononi cello on its the 300th birthday. He has performed in recitals in New York and Los Angeles with pianist Pascal Rogé, and enjoys frequent collaborations with distinguished fellow faculty at UCLA’s Royce and Schoenberg Hall, and Colburn’s Zipper Hall.

Other recent performances include a solo Bach recital at the Uffizi Library in Florence, Italy; two programs with Vladimir Ashkenazy and his sons, Vovka and Dimitri; a concerto performance with the American Youth Symphony Orchestra in Los Angeles; and touring the States, Canada, Italy, and Argentina with the show “Te Amo, Argentina”. Two seasons ago Antonio was invited to perform the cycle of timeless Suites for solo cello by Bach, at the Broad Stage series in Los Angeles. The sold out performance included an ornamentation of the stage with stunning projections, inviting the audience to a new “delight of spirit” through the art of digital photography. Following  that success he was asked to return to the Broad Stage for a performance of the cycle of Beethoven sonatas, with the pianist Tom Beghin. Beghin played on two fortepianos from Beethoven’s time, for a journey through Beethoven’s life, covering all three of the composer’s major creative periods. Mark Swed of the Los Angeles Times remarked:

Lysy is a cellist with lithe tone. He is elegant, not dramatic… This (sonata Op.69 in A major) is Beethoven’s most expansive sonata, and Lysy’s grace gave it a special glow.”

Antonio Lysy has recorded extensively for CBC Radio, BBC Radio, Classic FM, and other European radio networks. His live recording of solo cello repertoire by Bach,Berio, Henze, and Walton, released on the Pelléas label, is “…some of the mostbeautiful Bach ever heard” (– La Presse, Montréal). In addition, he has recorded forthe Claves, Dinemec Classics, and Fonè labels. In January 2012, he recorded andpremiered the reworked Eric Zeisl cello concerto with the UCLA Philharmonia directed by Neal Stulberg. This cd, highly praised by Donald Rosenberg on Gramophone is also available on the Yarlung Records label.

Upcoming projects of note include The Story of My Cello, a musical theater solo work, written for Antonio by the celebrated pianist/actor/producer, Hershey Felder.

Antonio’s love and commitment to chamber music is demonstrated by his musical directorship and founding in 1989, of the annual Incontri in Terra di Siena Chamber Music Festival in Tuscany, Italy (www.itslafoce.org). Distinguished artists from around the globe take part in this idyllic summer retreat, which is crowned by performances in medieval fortresses, palazzi, and churches in the Southern Tuscan region. The series celebrated its 30th anniversary in the summer of 2018. (www.itslafoce.org). Antonio invited his friend and colleague, the greatly admired italian pianist, Alessio Bax, to collaborate closely with him and act as Artistic Director for an undetermined term.

In 2003 Antonio accepted the position of Professor of Cello at University of California, Los Angeles. Prior to moving to the United States, he held a professorship at McGill University in Montréal. He was also, for a number of years, visiting professor at the International Menuhin Music Academy in Switzerland. Mr. Lysy appears regularly on prominent online platforms in ‘cello chats’, blogs and interviews, and shares his passion for teaching at international festivals in the summer such as the Heifetz International Music Institute in Virginia. Last summer he taught and performed at the Toronto Summer Music Festival in Canada.